I found finally some time to begin writing a travel blog about all my trips, experiences and activities the last couple of weeks. During these weeks I was busy with keeping up with some of my courses, mainly Korean class and Combinatorial Optimization, and having a lot of fun with the exchange students here. After some time spending on the homework of one of the hardest courses I have, Combinatorial Optimization, I came to the realization that I do not have enough time to realize all my goals for my exchange semester. These goals included to get to know extensively Korea, the exchange student life while still doing useful studying at KAIST. This course did not fit into that goal and was also too time consuming for me at a certain point. Therefore I dropped the course and focused on another way to study, which now became studying Tableau with the use of Coursera.

Anyway, this blog is mainly about telling about my experiences and trips! We visited a traditional outdoor café/restaurant Pojanmacha, which might not seem that traditional; the Independence Hall of Korea which shows the Japanese occupation of Korea from 1910 – 1945 and a trip to Busan during the Korean Thanksgiving, Chuseok. The rest of my experiences you will find in my next blog!

On the 9th of September the KAIST International Student Organisation (ISO) had a trip for us planned to a Pojanmacha, a traditional outdoor bar. You probably have an imagine in your head of some sort temple with a traditional roof, this is not it. A Pojangmacha is usually a small tented spot where you can get some street food and some drinks, e.g. soju. This is thus a very simple place to get food and drunk. Which was also the case for us this time.

We were advised to eat a light meal beforehand, however this was probably not needed with the amount of food we got there. They also arranged a bus transportation for us which took 20 minutes in heavy traffic, while 20 minutes walking would probably also have been sufficient. Nevertheless, the Korean organisers didn’t want to let anything happen by chance!

The food itself was pretty good, which consisted of some sort of fish stew, some meat and some kind of pancake/omelet. Together with the food we got unlimited beer and soju, which we were very happy with of course. However, the Korean drinking culture is a bit different than ours. The Koreans like to order a bottle of beer for a few people and then poor it in a couple of smaller glasses. Together with the beer, they usually drink some small glasses of soju. So the people at the restaurant were surprised that we wanted a bottle of beer per person.

The highlight of the evening came in the end when they offered us a dessert, which was ‘living’ octopus. The octopus wasn’t actually living anymore, because the octopus was just prepared and killed before we got it. Therefore its tentacles were still moving when we got it on our plate. Some people, including me, were hesitant to eat the octopus. Eventually I did eat and it was a funny experience. The octopus is quite chewy, and if you keep it on your tong for a while its tentacles will suck itself a bit on your tong. After that we went to Rodeo street and to Santa Claus to drink a few beers, so all in all a very successful evening.

Two days after the Pojangmacha trip, on Sunday, we went to the Independence Hall of Korea, the biggest museum of Korea located near Cheonan. This museum is dedicated to the occupation of Japan from 1910 – 1945 and it shows that Korea still want to remember the current generation about the atrocities of the Japanese. Some interesting facts and aspects of the museum:

In the period of 14th – 16th of September Korea celebrated Chuseok, the Korean Thanksgiving. Chuseok is the orginal harvest festival, which is the same as the holiday in the US and Canada although in a different period. This meant that we were free from Wednesday until Sunday! We decided to go with a group of 10 exchange students to Busan, the second largest city of Korea. However, we weren’t the only exchange students from KAIST there. We were with more than 60 students eventually.

Chuseok is also known for whole families to move to their hometown again. This meant that it was going to be insanely busy on the roads and trains. We booked our trip only 1 week before the holiday, so we were bound to some shitty times for the train. We booked the train at 5:30AM (slow train of 3.5 hours), but luckily most other students also booked that one. For the Korean movie fans among you, there is also a good zombie movie called ‘The Train to Busan’ if you want to see it. ;-)

We booked via Airbnb a room for 10 in a hostel close to the famous beach Haeundae, which is for sure a beautiful beach. So the first day we spent at the amazingly calm beach with nice weather, swimming doing some volleyball, football and walking around. In the evening we stayed in the area and drank some beers at the beers, which was full of people again. There were also some street performers, however, as we would know later, they perform the same thing every day. 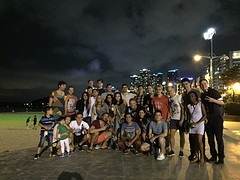 The next day the plan was that we’re going to one of famous temples in Busan, Beomeosa. We could have gone there directly, or taken a small hike on one of the hills to there. We compromised a little bit and we’ve taken a cable car to about 400 meters high and then hiked to the temple. But we underestimated the trip a little bit (about 4.5 hours), and therefore we were completely undersupplied. So we shared to food and water we had for the trip. Halfway through the trip we found some nice park rangers and they gave us some very nice dumplings and coffee. With these kind of actions we really experienced the Korean kindness.

After reaching the peak of the hill, which gave us a beautiful view of the city, we arrived at the temple. The temple was quite nice, but I also have to say that once you have seen some temples you cannot spot much differences anymore. So the hike was more worthwhile than the temple in my opinion. In the evening we ate some deserved fast food at Lotteria (the Korean McDonalds) and in the evening we had some beers at apparently a popular bar chain Thursday Party (yes, it was actually Thursday).

Friday was a calm day in which we decided to discover the city center, however it was still Chuseok so most places were still closed. This was also the case for the Jagalchi Fish Market, the biggest one in South Korea. Instead we walked through the neighborhood and a Lotte Shopping Mall. For lunch we had seafood for which I was a little bit pessimistic first, but really nice in the end. You can see a video and some photos below. In the evening we went out for some beers again and ended up in a new club where foreigners got free entrance and a drink to lure the rich Koreans in, which was still a fun evening. The Saturday was a hangover day so we went to the largest shopping mall in the world, Shinsegae Mall. It was indeed very big with a lot of luxurious shops, an ice skating hall and a cinema (even on with beds in it instead of chairs). In afternoon we went to a movie The Magnificent Seven which was entertaining, but not that good. After that we went to the other famous beach in Busan Gwangalli to have some dinner with a nice view, which was the sea and a nicely lighted bridge. There were some burgers eaten and stayed after that for some beers and playing darts. Sunday was another hangover day and we didn’t do that much before going back to Daejeon. Although some had to study, and some went to the cultural village, me and Mark decided to make a quick stop at the National Maritime Museum. It was free again and they definitely put a lot of effort in it, only the view was worthwhile.

This was my first part of discovering South Korea, hope you enjoyed this first part! A second part of my adventures in South Korea will come soon again! :) 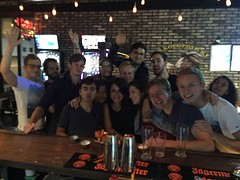 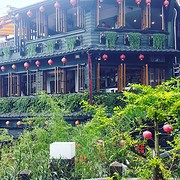